Today saw a major turnaround in fortunes and we are delighted.

Henners actually poo'd (sorry to sound crude) but it means that things are working now.

The morphine has been reduced 50%  and the stomach pump has been removed as well and tomorrow 'H' will be allowed water and some food.

We are keeping fingers crossed that Friday he will be allowed out. It still seems too soon but the doctors seem happy.

In the meantime H will attend the hospital school to keep him active and when he comes out they will send a teacher to the home until he is fit to return to school.

I couldn't wait to put the telescopic to work and push on a bit with the work. We are so behind now so a bit of catching up is needed.

I managed to put all three lintels in place and a corner stone using the machine and block and tackle. 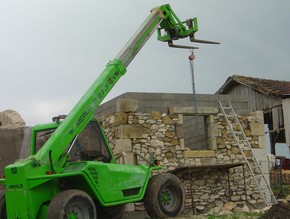 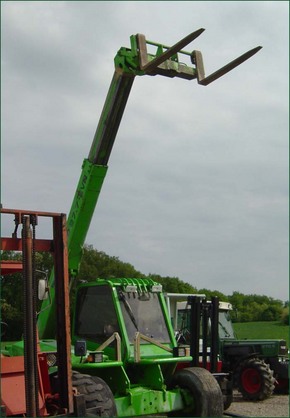 We are taking it in turns to see Henry although Donna is taking longer turns whilst I deal with the housing situation. As you can imagine it has been difficult to achieve a great deal since James left due to the fact I was having to work on my own and there is no way of lifting a 3-400kg lintel in place.

It was decided some time back that we would need to hire or buy some kind of winch, crane or elevator so that I can work safely. I have scoured websites and made enquiries regarding telescopic handlers but I got nowhere.

Then by chance whilst driving between Cancon and Castillioness I passed a little yard with a Merlo telescopic parked on the hardstanding. Fate? It was just 9km from where we are. I called the seller M Gautier (Jean-Pierre) on his portable (pooortabler) and went to find him.

Henry has seen a good improvement since the operation a week ago.

His white blood count is good and the doctors are pleased.

The intestine does not function properly yet but he is passing wind which is a good sign. The stomach pump was to be removed yesterday but unfortunately 'H' vomited so we are not sure if they will still do this. Although the Doctors are planning to give him a little food and water over the weekend. They would need to see the food pass through before we can call it a success.

The pain is coming down and its difficult to asess what is 'real' pain from inside and discomfort generally. The morphine use is going down and the Doctors have told Henners to grit his teeth through this week and try and take control. They must be hoping for a rapid recovery this week because they have penciled in next Friday 20th or the following Monday 23rd for release so it has to be a team effort (patient and doctors).

Donna and I are amazed by how he has coped during all of this. It was only yesterday that he moaned a little for the first time but otherwise he has remained strong throughout (its the rest of us that has struggled!!)

The Doctors are pleased with Henry's stumbling steps towards recovery.

His biggest challenge at this time is managing the pain. He is now on Morphine to combat this. The Morphine is administered via a drip into his neck and can be boosted by himself pressing a button when it is unbearable.

As parents Donna and I are so proud of the way 'H' is challenging this. He does not complain about the situation he is in but has no choice but to deal with with what is thrown at him.

Yesterday he had a temperature which worried us but today it has subsided and we understand the white blood count is good.

It remains for another nights sleep and rest and the challenge of another day!

Amongst all of our recent turmoil we have to consider Fleur who has been pushed from pillar to post whilst we navigate our way round. 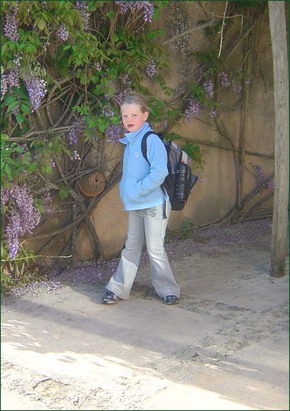 It was to be Henry's and Fleur's first day at their respective new schools but events have rearranged this.

However Fleur's moment wasn't to be undone and quite rightly she looked forward to it. Donna dropped her off on her way to Bordeaux and I collected her at 4.30pm.

She breezed out hand in hand with one of her newly found friends in a school of only 19 pupils and promptly gave the experience 10/10.

It has been a few days since the last entry in the log.

In that time we have spent much time at the childrens Hospital in Bordeaux with Henry.

Friday morning the doctors operated to remove a section of his small intestine together with a Meckel Diverticulum which was secreting the contents of his stomach outside of the stomach wall.

It appears it is not uncommon for children to have this condition but much less common for children of Henry's age. Many people who have it never get a problem and it seems that some Meckel Diverticulum contain stomach cells and eventually the wall is eroded by the acid and causes ulcers.

In Henry's case abcess' were formed more aggressively and unfortunately the Meckels Divericulum was not spotted nor removed in Veillenauve and hence the deterioration afterwards.

The doctors tell us that Henry effectively suffered with a similar condition to a burst appendix (Peritonitis).

After the operation Henry remained in the post-op area for the day. We saw him in there at 9.45am and did not see him until 8pm that evening and that was just to kiss him goodnight. All day Saturday he remained on the edge of sleep with the effects of the anesthetic and pain killer. The pain is a big concern to us and his discomfort is so apparent.

The main thing is that the op went well and now he will recover over the next 2 weeks and hopefully eat something soon.

James came out for the bank holday weekend to help with the house on a Flybe flight from Southampton. An easy route for him as its 40 mins from his home and 4 hours door to door.

It turned into a poor experience though when I returned James to Bergerac for the return flight. Having been caught up we arrived at the check in 6 minutes late and to our horror James was refused entry to the flight.

The staff (eight of them) said that it was not possible to permit him onto the plane as stict regulations prevent dhtem from altering the manifest after the closure of the desk. They claim that the Captain denied us permission to board and that it was the law!

We stood in the check in hall and heard the call for passengers 1-7 to come forwar for boarding. So frustrating too. They seemd totally oblivious to customer care and a jobsworth attitude prevailed.

The sooner Ryanair compete with Flybe on the Southampton route the better.

Flybe doesn't seem to care for its customers.

During the weekend Donna kept vigile over Henry whilst I continued to work on the house. It took some long discussions before we made the decision that we should continue with the work.

James Hodgkiss our friend from Bordon called us and said he had booked a flight for Saturday morning from Southampton and would arrive in Bergerac at 9.50am. We decided to accept his kind offer and plough on with the work through what was a abank holiday in England. 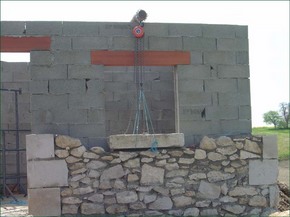 James was due to leave on Monday night (see next post)

We grafted solidly for 10 hours a day for 3 days and got upto lintel level. It was most succesful and Donna and I cannot thank James, Tracy Adam & Chloe enough for the sacrifice over the holiday weekend. Henry will have his operation on Friday and not Thursday as we reported before. We have seen the scans which show air in the abdomen caused by the hole.

The abcesses remain and are a direct result of the bile leaking through the hole.

Henners has remained strong but today seemed his lowest moment. I drove to Bordeaux today to be with him but missed the turning and went into the city. Instead of taking 2 and a half hours I took four.

I called Henners whilst stuck in traffic and totally lost and he crumbled!

The doctors took out his staples, tried unsuccessfully three times to re-site his line and remove the stomach drain. I think the pain was un bearable for him!

I spent the rest of the day with him watching the Great Escape and Jack Nicholas' 'My Way' golf video and played cards.

He was in good spirits when I left him.

We will camp in Bordeaux on Famille throughout the weekend after the operation. The recovery will take an initial 5 days without food or water and then a further 5 days before release is considered.