As Neil Diamond sang about.

Although still August this morning was just brilliant. The light was fantastic and as this picture shows at 7.30 the countryside, although very dry is so beautiful. 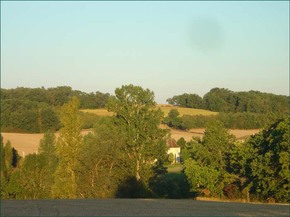 Construction is going well and we are getting close to finishing all of the stonework. I reckon another 3-4 days and it will all be done. 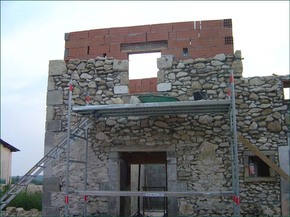 Unfortunately. the telescopic still rests where it conked out in the yard and awaits the new parts from the garage. It is sorely missed as it is needed to get the last of the corner stones into place. 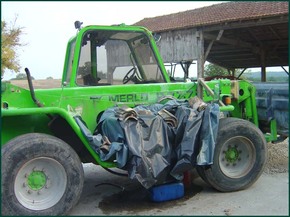 What a plonker - ADSL

When I decided to write a blog with nearly wort's and all I even revealed some of my stupid moments. Well, one of them was cutting through the cable the day I was connected to the phone.

After yesterdays lengthy and regular chats with Tiscali they revealed that it was probably a cable problem between me and the exchange. I have dug up the cable this morning to see that two bare wires were touching in the junction box.

Pulled them apart and came back to the house, plugged everything in and away she went

Thanks to MG for pointing out what I suspected yesterday.

Apologies for the lack of updates. The ADSL is down again and we are waiting for a technician to come and test the line. It appears it may not be anything to do with our computer or modem but the line itself. They have promised a solution by Saturday.

Mathew my new buddy has been a revelation and has given me a huge lift. We are making fantastic progress on the pigeonaire now and hope to complete all the walls this week,

A visit to M Fabre the carpenter was dissapointing as we are still a month away from his visit to do the roof woodwork. I am not to worried as there are doors and windows and the plumbing to do.

But in summary we are back on track and as today has been cloudless, hot and still we are back in heaven.

Long may it last.

After joyfully surfing the internet using my now re-installed superfast ADSL I find myself back onto dialup. An incoming call disrupted the ADSL signal and it will not work again despite restoring and re-installing again.

If anyone has any ideas please get in touch.

The telescopic has its engine in bits as a major problem internally has occured. The engine started to make a funny noise on Wednesday and it ground to a halt. A visit to the local tractor garage and subsequent visit confirmed after much blowing and gesticulating that there was a major problem. So no fewer than four people turned up together  yesterday in a convoy of vans and cars to look our serial numbers and work out how to move the heavy lump to the workshop.

They opted to dismantle it on the spot but couldn't confirm what day next week they could do it as they had another tractor on the go. Low and behold a mechanic turned up after lunch and single handedly took it apart to reveal that the rods which raise the valves were bent as they were forced against the rockers with some force and the valved had struck the piston heads where the timing was out.

A large cog had sheared its teeth where the power is taked from the engine to drive the hydraulics and we are hoping that a new pinion and re-timing will cure our woes. If it doesn't we will need a new engine at a cost of circa 6,000 euros!!!

In the meantime they have lent us a four wheel drive tractor with front loader for free.

Well 10 minutes after my post saying broadband had arrived it went off and has taken until today to fix it! Now the speed of dial up I hope is banished forever.

We have also had a good day with the building although the telescopic has broken down. The tower is completed in block work and today Mathew and I faced it with stone. I am hoping that in a week (two maximum) I will have the tower finished and ready for the roof. 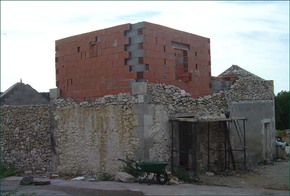 It has been a wonderful week.

After recieving the modem and software from Tiscali some 10 days ago I have not been able to configure my Broadband connection.

I have istalled, re-istalled, de-istalled and rebooted and changed the ethernet connection to usb and back and sought advice from my friends in the IT industry but to no avail.

Then today after arriving back from Monflaquin I thought I'd just have another go.

Bing, the ADSL light stayed on and up she fired up!!

It will mean updating this site alone is a lot easier.

The garden furniture is finished and I am rather pleased with the results. 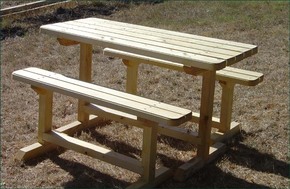 Thats how the saying goes.

We have 3 things arriving next week (four if you count our friends David, Sarah and the children)

Firstly We will be the proud owners of broadband from Tiscali. A luxury that we didn't think would happen for a long while as we are some way out of town. 30.00 euros a month will get us 1 meg and all of our calls within France will be free. Utilising Skype too we can call the uk for 1 cent a minute so very cheap at about 40p hour .

We hopefully also will get our permission (fingers crossed) and also I understand we have a heatwave about to arrive (as if 30-35 degrees wasn't enough). We have already had a fantastic summer with the weather. I am hoping for an extension like last year which saw us sitting on the terrace in temperatures of 28 degrees in early November.

Whilst waiting for the Permis we have not been idle. Donna continues to harvest and I have been making some garden furniture. Investing in a combination table saw a while back I am able to produce some very tidy patio sets at a fraction of the cost of the shope (take out the capital outlay of course but I hope to retrive this several times over by making the doors and windows and fitting cupboards etc. 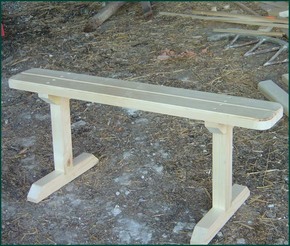 I have made a table of the same style as the bench above and another bench in time for our friends who arrive next week for a camping (and building) holiday.