Hallowe'en is big business in France and all of the children will be out in the villages dressed up and generally having fun.

In the UK (although it is dying now) Bonfire night is the favourite, the French didn't have Guy Fawkes and this festivity comes in the middle of the Autumn holiday.

I kinda regret cutting off the box balls in the spring although I do realise in the long term I have done the right thing. Before the balls gave presence to the front door area and at the moment they look a little lacking in size.

The growth it seems has been thwarted by the very dry conditions although I must admit they have rounded off nicely. Next spring I will trim them to shape but at least through this winter I will let the growth remain to firstly harden off and secondly protect the ends from any harsh cold weather. 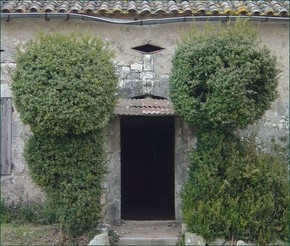 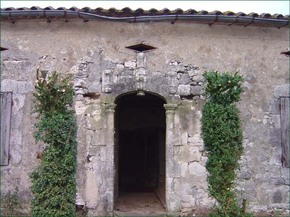 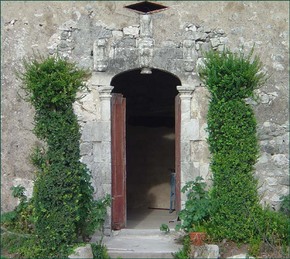 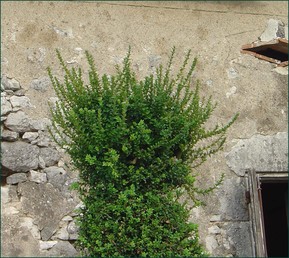 I asked Fleur to paint her rabbit run with waterproofing treatment. Luckily she managed to get some on the cage as well. 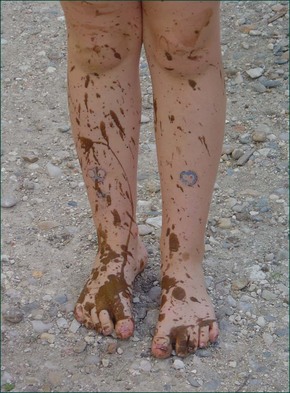 Skype me! If you have broadband then this little piece of free software is fantastic for rabbitting over the net for free.

The software is available here

What a difference modern day building methods and styles are to the buildings of yesteryear. It is great fun and very interesting when you start to strip back old plaster and floor boards that have probably been there for 80-100 years and try to imaging a person actually doing it.

It is at times like this I wish a building could speak to me and or I could hear the artisans talking in the room that I am at great pains to return to its raw state before moving it into the modern day.

Many houses retain the old features in France and to us they are very pretty but to me they reveal a hardship an struggle of a bygone age. This stone sink is just inside the front door of the main house and it still had the copper pipe (added much later I should think) which would have pumped water from the well across the track.

The drainage was a simple hole in the bottom which just poured out through the wall into the soil outside the front door.

The wall that the sink is situated in looks to me like it was once an external wall  with what looks like an old window that has been infilled with tiles and I am having fun trying to work out the original configuration of the building as I am sure it has been added to over the years. 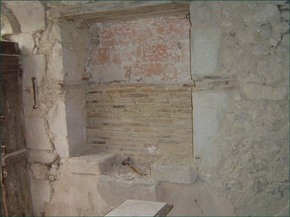 I think the front door surround was added at a later date. 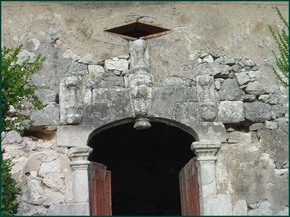 I am sure it has been reclaimed from another building as it seems very regal for this kind of property although it does it justice.

We have just completed removing all of the old plaster. 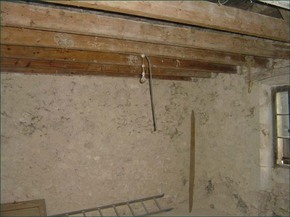 Well what a saga!

We still await the start of the roof. It has been a long and tiresome wait especially as the weather has been wonderful here. So warm and dry and ideal for cutting the roof before the winter..

Speaking to M Fabre last Sunday we learnt that he has started to cut out the necessary beams and chevrons at his workshop and next week (I wont hold my breath) he will come to fit it all together.

Sadly he has told us that he wont have time to do the two lower roof's so Mat and I will attempt them.

Today is the first day of our farming experience. I went with M Bertrand yesterday to the co-operative to purchase 450kg of Ble and today ahead of some scheduled rain we are drilling the fields.

We know that we will not make a profit on this for 2 years or so but knowing we are involved with the society and keeping the system alive is very warming. 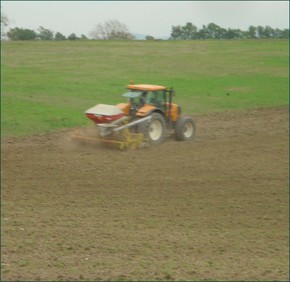 This last year has not ceased to amaze Donna and I. The children have been at two French schools since we have been here and of course Henners' troubles are well documented but last week we learnt that Henry has come joint top for his schoolwork in the school.

Henners is like s sponge for information so we should not be too surprised but to think what he has gone through we find it quite amazing.

Fleur came third in her school but she has a little friend who she speaks English to and the teacher has said that she has become a little lazy with the language.

Back in the spring Donna sowed some Parsnip seeds. Notoriously difficult to germinate we were only moderately successful. Today we decided it was time to taste the fruits of our labour.

The results were very pleasing. 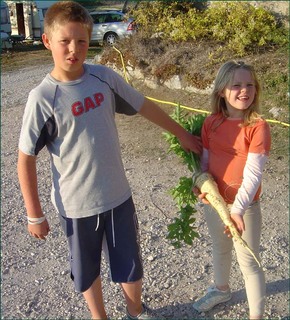 We have also put to good use the toamtoes. 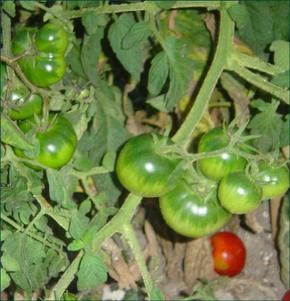 As the winter nears we have many green tomatoes so Donna has turned some into Green Tomatoe Chutney. It looks good but we need to wait another 6 weeks to tast the results. 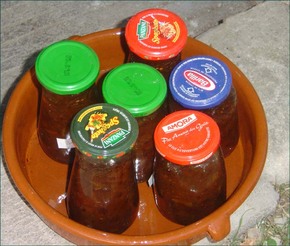 Sadly the same success cannot be recorded for the Fig Chutney! Donna, spent the afternoon picking/collecting the fruit and preparing them. Unfortunately she also decided to leave the mixture simmering whilst she collected the kids from the bus and when she returned we found a substance that Tarmac would have been happy to coat the M1 with!

Good experience though and we shall know next time.

It has been an extremely busy week. But as the weather has been superb and quite hot I have been able to progress and complete the Fosse.

This inspection chamber (Regard) has to be left open until it is inspected. 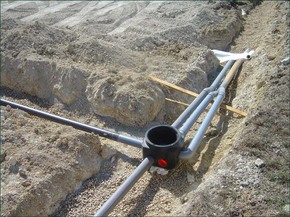 We have been extremely lucky with our requirements regarding the Fosse Septic.

The regulations are and having been going through a major overhaul and the local Mairie have a responsibility to ensure that all old Fosse Septics comply by 2006 (A hard task). Out of 4.5 million tanks in France, 3.5 million are thought not to comply.

In our case because we have a lot of ground around us and good drainage we have only needed to have a gravel drainage under the perforated pipe. Our neighbours were not so lucky and they had to have a sand filtration bed which proved very expensive.

The land is tested for permeability by an agency acting for the assainisement. Cost 600 euros 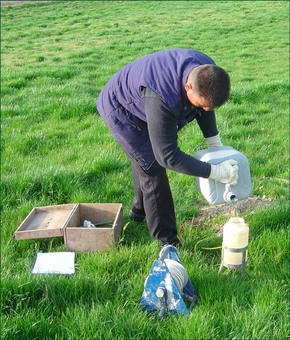 The evacuations reach a concrete Fosse which is buried under ground. The pipe work is a standard 100mm underground plastic solvent weld.

After it enters the chamber the effluent is digested by the bacteria (be sure not to use bleach or other chemicals that will destroy this).

When the levels reach the outfall the clean water is filtered off and is discharged to an inspection chamber (regard). In our case we have 4 outlets from the regard which exit level, for a minimum distance of 1 metre.

The water is then equally distributed over the four pipes which branch off laterally into black plastic perforated pipes which is encased in 20mm gravel (30mm under pipe with 20mm depth on top). A Geotextile membrane is rolled out over the gravel and top soil levelled over this. 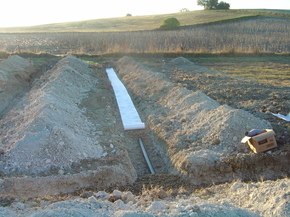 Our requirement was for a minimum of 75 metre length of perforated pipe. There are many ways to do this but we opted to have 4 lengths of 20 metres each.