Time for a spot of gardening. Glad we didn't have to do the weeding by hand though!

The soil in front of the house is being prepared before winter for the planting of the sunflower seeds in late spring next year. 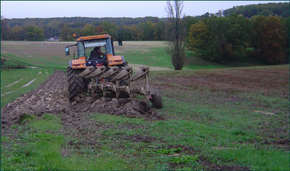 M Fabre has unfortunately blown us out. We waited patiently for him and believed him when he said he was going to do our roof soon.

It is a great disappointment to us because the best of the weather has now gone and we have had no choice to rent a small gite for the worst of the winter.

Luckily the two other roofing contractors are proving to be more efficient and professional and we hope that the pigeoniare roof and two smaller ones will be started and completed in January.

Never mind, we don't get too disheartened for long and it only makes us more resolute.

In the meantime good progress is being made in the main house. We have a plumber starting this coming week and I have all but completed the floor boarding of the upstairs so we pretty much have two defined rooms now. 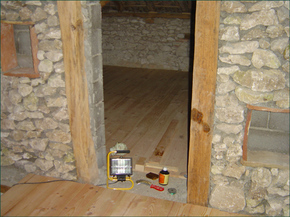 Yet another new addition to our clan.

This time Meli is an orphan who's  owner, our distant neighbour died in the summer. Whilst surviving on food left by holiday makers at an adjoining Gite though the summer it has no means of finding food once the house was shut up for winter.

So in we stepped and as Fleur kept pestering us for a cat it seemed like her destiny was sealed and we brought her home.

Unfortunately, Hector scared her off the minute she arrived by chasing her down into the woodland. She stayed there for 2 days and only venturing back in the dusk for food. We became quite concerned and thought she had left for good when she went missing for 3 or 4 days but she has reappeared again and spends her time in the barn.

Hector, who only really wants to play (honest) as he is a little softy always takes the opportunity to have a little go but a swift claw keeps him in check.

Even Donna and I have quite taken to her as we both have never had or really liked cats before.

This photo is of her running away as usual but I'll try to snap the front one day if she stands still long enough. 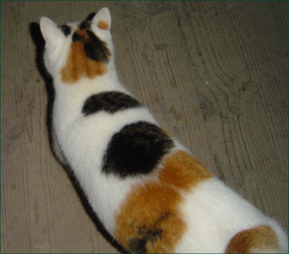 Although M Fabre has still not arrived we have had some other successes.

Firstly, at the 4th attempt we have managed to obtain a quote from a plumber. The first two never even bothered, despite repeated telephone calls to send a devi (estimate) the third never even showed up.

The 4th though arrived the same day as Donna visited his office and today we have received his quote which we duly signed and returned.

He is (hopefully starting in 2 weeks)

As I said M Fabre has not arrived but we have had two meetings with two separate roofers who have both promptly arrived and measured and we await their quotes. I feel confident that both Will come up with the devi so watch this space.

Luckily both can start in January which would be ideal.

In the meantime, we have made great progress in the main house.

All of the plaster is off of the walls and the dividing wall is down. The concrete floor is in and today I completed the internal upstairs wall out of block and stone that will divide the bathroom en suite and our bedroom. 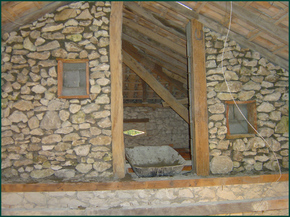 The floor boards, 18cm wide  pine we collected from a wholesaler at a fantastic 6.60 euros per metre squared. That's about £4 so a bargain.

So lets look at the old floorboards.....alright my loves:) 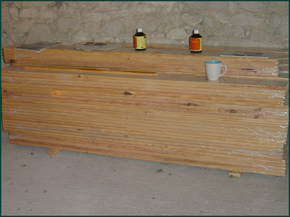 We have also moved into a Gite as the weather has turned cold (-3 last night and it feels the same tonight). This means I have to disconnect the computer so my updates and piccy's are a bit sporadic.

Sand blasting of all of the internal walls was a dirty and tiring job. Using 1 tonne of medium grade kiln dried silica sand and two arduous days Mat and I took it in turns to carry out the task. 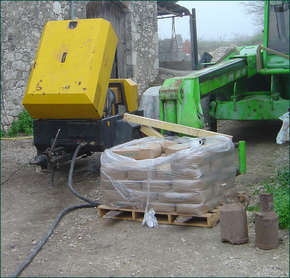 The sand is introduced to a metal cylinder and depending on the size you set the aperture at the bottom basically trickles from a hole at the bottom where it meets a very high pressure jet of air and it is blasted against the stone. It is seriously abrasive so it takes 10 minutes or so to get used to it but wow! does it get things clean (better than Daz). 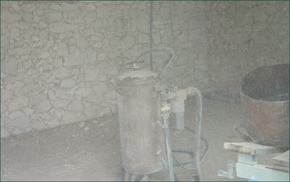 The day we started was misty and the humidity cause condensation in the cylinder. Other than that it went really well. Mat, because he climbs like a gymnast did the upper levels on day one including all of the beams and joists and I did all of the lower areas on day two. 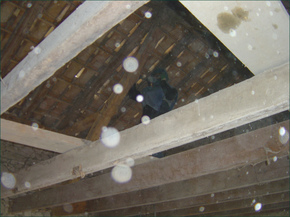 Was I exhausted after that exercise. The whole thing cost us 85.00 euros per day plus tax for the sand blaster including the diesel compressor plus 15 euros delivery and collection plus diesel of 16 euros and 165 euros for 42 x 25 kilos of sand.

Well worth the money.

Afterwards, Mat had to shimmy up onto the roof to reset some of the tiles. 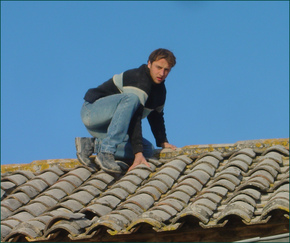 No this is a truly handmade peasants chair. All of the wood is hand carved and I guess it is how things had to be done. There just was not the money in those days to splash out. 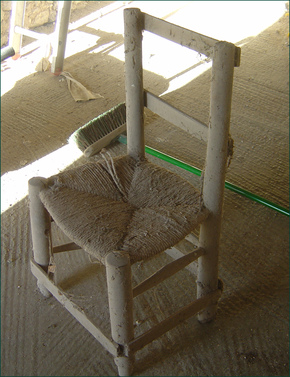 The new rabbits cage is finally in use. Fleur collected Miel (Honey) from the Centre. Hector has been so intrigued that he sits next to the cage for hours just watching her. Miel is not afraid of Hector either and sometimes their noses get quite close to each other as they 'chat' through the wire. 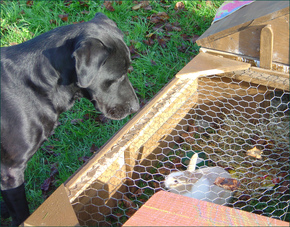 I decided in my wisdom to take down the second part of the ceiling which is above the 'snug' where we have the computer and wood burning stove. There was about 12 inches of debris, wood, bottles and old chairs.

The dust was so thick you could cut it with a knife. 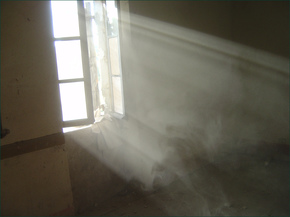 As a kid I remember a tv programme with Diane Keen and Lewis Collins called The Cuckoo Waltz.

Well tonight I was reminded of this when I sat in my deckchair infront of the woodburning stove. Back to basics isn't the right word but what fun. 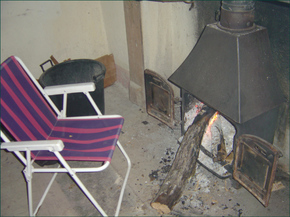 It seems so strange that I stood and watched the sun set over a clear blue sky this evening. Not unusual but tonight is bonfire night. A night that I have great memories as a kid celebrating Guy Fawkes ill fated attempt to blow up the Houses of Parliament.

In England we would have heard and seen rockets lighting up the night sky but the evening was still and quiet here.

Its a tradition that is nowhere near what I remember as a child or indeed when we moved to Oakhanger in 1990.

Oakhanger had a much acclaimed and envied traditional display which was admirably organised by the Village Hall committee and especially Chris Drew and Colin Jenkins (not to mention the hard work of many others) who turned an event for the gathering of just the village of Oakhanger to an event that probably attracted over a thousand people in its heyday until it was forced to close by EHDC who in their wisdom said it was a health and safety nightmare.

The Oakhanger display became a victim of its own success and I seem to be reading generally that Bonfire Night is probably a dying tradition.