Please excuse the lack of updates.

We are one full day and a most of Thursday away from our first guests. Progress is good and we are still on track and we are now on the really small finishing touches. 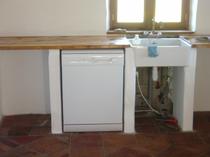 Donna is starting to wheel in the furniture, kitchen implements and accessories and curtains whilst I make the final fittings to the structure. 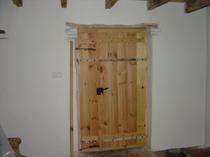 I have just completed the front door. I wanted (and will still do so) to make a new one in hardwood with a frame. However, due to time constraints I have opted for an intermediate solution and re-produced the original door in softwood.

The tidy up has also started but the temperature hit 39 degrees today and its almost impossible to work between 12-4pm. Hence the late finish tonight.

Mind you the sunflowers are at their peak and the sun brings out their character. Phew what a scorcher!

We are basking in temperatures in the high 30's here and even though the deadline is only three and a half days away work is nigh on impossible in the middle of the day.

The only consolation is we now have the pool to dunk in when it gets too much.
The water is at a pleasant 29 degrees so it is refreshing without being shocking.

The mornings and evenings are spectacular though and after 6 pm we aim to get at least 5 hours work in.

It was touch and go after the great storm as to whether we would be able to get the harvest in.

Luckily the weather is brilliant and last night and continuing today the combine finished the job.

I am happy to say that Miel is hanging in. The critical 48 and 36 hours have passed and although his eyes are swollen and red raw there is no weeping. The nose or the ears have not or at least don't seem to have become worse.

I attend to him  regularly during the day and even last night at 12.30 pm felt compelled to just watch for a few minutes.

Henners walks into the sea, Hector watches him go from the shore.

Or does he? Look again!

The first answer via comments qualifies for a day off on Sunday.

I think we all have a rainbow, its just some have not appeared yet!

I remember, back in 1990 whilst working at Fishers Cottage, Chiddingfold for Carrie Zetter, I was caught in the most amazing downpour. At the same time the sun shone so brightly and in the foreground, just 20 metres or so away appeared this most brilliant rainbow.

I am not exaggerating but where the rainbow touched the ground I built the famous 'Walled Garden' (Oh to have blogs back then when computers were mainly for the wealthy and certainly internet access was non existent.).

OK the treasure wasn't golden but in its own way that Wall Garden was rich in experience and it put me on the map. At the time he recession was deep and hard yet my little enterprise was flourishing, especially as Carrie, who was a wonderfully generous lady kept throwing work at us.  It was all I could do to keep up , it was exhausting and I was only 26 but felt like 46.

What has this got to do with rainbows you ask? Well I guess lifes rainbow is never ending and that rainbow, whilst only in the minds eye is still piercing through lifes heavy showers even now.

When we left England that long rainbow stretched far across the channel to here in South West France. For us it landed next to a tiny Hamlet at Piis some 6 kilometres from Monflanquin.

I am sure that many people, whilst wishing us well kept the 'what the hell are they doing' thoughts to themselves and it is fair to say during this journey we have felt that more than once.

The plan on paper was so simple. Move to France, buy a ruin, live off the land and be happy. The reality! Hard work, much stress (different stress though) and at the moment little time.

Today we are less than one week from the fruition of phase one. The opening of our lovely Pigeonaire.

Its been an amazing journey and such an experience and one all of us feel has enriched our lives.

Completed the paving around the pool today. 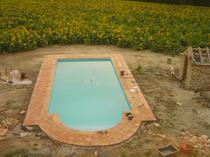 As narrator of this blog I admit I do tend to paint a 'me, me' atmosphere.

I certainly don't intend to do so so this time I have to pay tribute to Donna. These last two days she has felt dreadful with a swollen throat and generally under the weather. A layman might conclude that she is run down as we have worked solidly for more than 6 months. 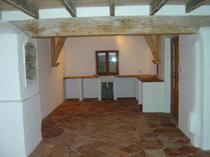 In the last two days, she has had to tidy up after the electrician, sweep the whole place out, clean the floors and oil the floors upstairs.

The biggest job was to cut in the walls and doors etc with a brush and paint all of the walls. Today she completed the painting and then washed with a mild acid solution the tiles downstairs.

The whole place is now looking like a home and this coming week apart from assembling the furnishings we need the window in the piggeonaire to replace the plastic and the main focal point the front door.

Another night goes by and Miel seems quite happy and no worse. The sores around the eyes and nose are are raw and inflamed but he seems happy and is eating well. 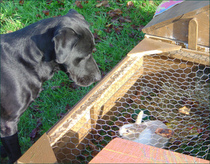 The Vet gave us some ointment for the eyes and although difficult to administer might be making it more bearable.

Not out of the woods by a long shot but there is hope.

This is a photo of happier times.

I think I said before that the veg patch has taken a bit of a back seat as most of the efforts go into achieving our goal. The weeding is behind but it certainly hasn't deterred the yield. 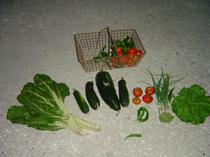 Courgettes, last years prize crop are again in abundance and remind me next year that not even 6 plants are needed to feed a family of 4!

We have tomatoes, Lettuce, Garlic, Spring onions and peppers, oh and courgettes!