You know, whilst researching pool installation I scoured and scoured the net for info, especially informative photos that reveal tricks of the trade. Most searches took me to the US where they seem to mainly install gunnite pools. Its ironic, that after completing the pool I find this site and blog which cover many issues and procedures with lots of case studies together with photos.

One of their pools is spookily like ours and overall I am please with what we have achieved at the first attempt. 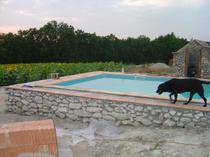 Looking at their examples we may well have gone OTT on the concrete base but in my view you can always be too weak but never too strong.

The tiling seems a bit slow but I am on target for completion Thursday.

My apologies if this post is offensive but today we discovered that our rabbit has been infected by myxomatosis.

I have never seen a rabbit here at Jean Blanc even though we are so rural. There are plenty of hares so it has come as a devastating shock to us. Miel does not seem in any discomfort and is eating and drinking properly. A visit to our Vet was taken with apprehension because we were certain the prognosis would have been against us. 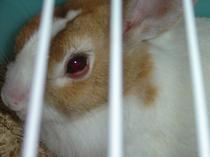 However he said that there is a greater chance for a domestic rabbit to recover.He is a great character and I have to admit being rather attached.

I have seen Mixi too many times to count in the past but this is very much more emotional for all of us. We won't take it for granted but we have to hope.

Were back on track.

It seemed to take an age to empty the pool out, remove the offending light and fill it back up. 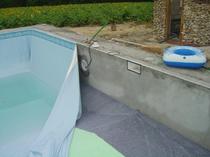 On arrival of the right water level to fit the gasket to the light we found the kit didn't have any screws with it. This means the filling has had to stop and Donna has to go all the way to Villeneuve before we can proceed.

But it is pleasing that we are well within schedule and today the tiles are starting to go down around the edge. 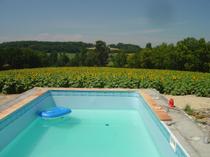 The weather is glorious and with the sunflowers, the twinkling water and the fantastic blue sky its hard to keep your head down and work. On the plus side a quick dip to cool down before lunch was just the tonic.

So, for most of the day we have been pumping the water out back into the well and tomorrow we will have to set it all back up again and repeat the filling process.

An unwanted twist to the pool saga, especially as I boasted yesterday of how quick it all went.I ought to learn I suppose that its never over till the fat lady sings.

Mind you the kids have enjoyed sliding down the slope as it filled and today Henners and Fleur and 6 friends enjoyed playing as it emptied again.

For the rest of the day Donna succeeded in painting the second bedroom and I built the terrace walls and steps and  levelled the terrace.

11.30 pm and time for bed. It has taken all this time to bring the water level just above the start of the shallow end. The water will be turned off overnight and resume in the morning. 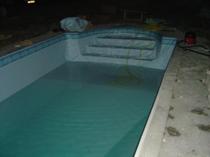 It has taken barely 4 hours but I am pleased to say the liner together with the underlay is finally in place and water is pouring in as I type. 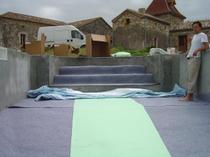 What a relief, what a milestone and I must say what an achievment. Mat and I sat over a bacon sandwich and reflected on the speed in which we not only dug out and constructed the pool itself but the walls surrounding it and the pool house all in just about 4 weeks.

I feel like I am walking on air as it is a major major job crossed off of our diminishing list. 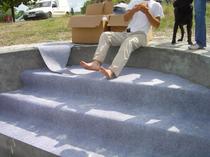 The day started later than normal due to a bit of battery re-charging. Mat arrived at 9 am and we set about scraping any sharp edges from the walls and floor of the pool. Next we cleaned all plastic surfaces which were to have a gaskets fitted to them to seal the liner against.

Then we had to brush and hoover to rid ant sharp stones that might cause damage and then glued the geotextile carpet to the floor and steps. 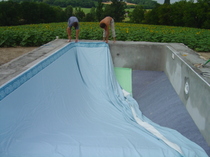 After the liner was unfolded and place in its rough position. We then found an appropriate starting point and then proceeded in inserting the beading. Donna pulled the liner straight whilst Mat and I fed in the beading. We then cut screwed in the plastic ring to the sump hole in the deep end and cut the liner.

Water then started to flow! We have to now periodically stretch the liner as it is filling and when we get to the appropriate heights with the water we will fit 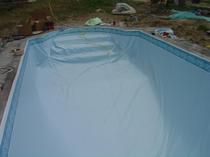 the jets and skimmers.

In the distance the lightening flashes and the thunder rumbles.

It looks like just another thunderstorm but it turns out to be far from normal.

Global Warming I am sure will get a mention when people remember the storm of the 4th July 2006.

The day was hot from the off. I got up at 5.15am for a 6 am start and the atmosphere was already close. The sky was crystal clear. The sun, when it emerged was big and brilliant and did not give a clue of what was to come later. 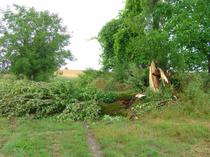 Mat and I continued with the pool house stonework. Progress was good but the temperature extreme and at times overpowering. I certainly suffered with the heat and intense sun.

By 6 pm the atmosphere was unbearable and extremely heavy. In the distance a dark blue blob appeared. The rumble of thunder could be heard and the flicker of lightening flashed every 30 seconds or so. There was no indication at that point of the intensity of the brewing storm. 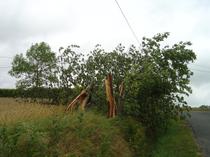 I took a video as the lightening and thunder intensified and the sky blackened. The rain started slowly but within 30 minutes was as heavy as anything we had ever seen, The initial storm at the time we thought was the worst but didn't realise the night would get wilder.

By 9pm the power had gone and the rain and wind lashed against the building. The noise was like an express train thundering through a tunnel combined with a  jet plane taking off. 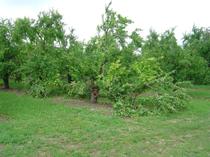 By now water was pouring under the front door and also through the joints of the windows.

The following morning the damage slowly became apparent. Trees were snapped like matches. Our neighbour lost 60 prune trees, torn from the ground.

I have no idea if it was a hurricane but it was a powerful storm. EDF were certainly tested and today nearly two days later we had power restored.

I fear the repercussions will be felt for a long time. The trees that bore the plumb which survived had been forced to jettison its valuable fruit and the livelihood of their owner sleeps on the ground below the tree that once was its lifeblood.

We have it in our posession! 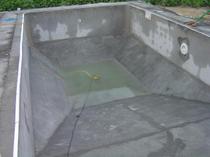 Yes the liner has arrived or more exact Donna and I collected it today from Villeneuve together with the final accessories. 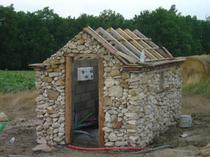 As I said before, barring a mistake with dimensions on my part and the weather remains good tomorrow. The Meteo says it will be fair for the next 4 days so fingers crossed.

This evening I am pumping out the water from the storm.

We have just had power restored after nearly 48 hours. I am sure you are aware that France has suffered badly in some parts from the devastating high winds and thunderstorms accompanied with lashings of rain.

We got away lightly with just some tiles blown off of the roof and other superficial damage.

I don't have the time now but later this evening I will update the site and I have a video of the first part of the storm and some photos of the damage around.