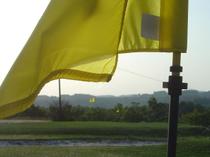 Do you believe in coincidences?

I certainly do and this week it has re-inforced my view.

Donna has a little job updating a database for a UK company. Part of this entails calling people on the data base and trying to place them on contracts worldwide for oil companies. 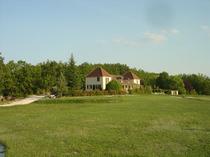 One of the people on this list that Donna called lives near Castillones just 15 minutes from here at Jean Blanc. It turns out that this person, Peter Fuller, and who is a specialist Electrical Engineer working on a pipeline in Siberia, has built an Executive golf course between Bergerac and Castillones.

The club called Les Mirandes is situated high on a hill with fantastic far reaching views and was opened in October 2005 but, unfortunately it has not been without its problems.

When Donna spoke to Peter to discuss a contract placement he explained that he had built a golf course near Bergerac but had lost his Greenkeeper and has been forced to close the club until a replacement is found.

This is the interesting bit for me. Because of my experience in the greenkeeping and landscaping industry, and my green keeping qualifications gained at Merrist Wood College Guildford and Sparsholt College Winchester, I offered to help in the interim and get the course back on its feet for reopening in mid October.

The golf course is in a very rural spot and doesn't benefit too well from passing traffic. I feel that It is essential to promote the course which boasts a very friendly club house with swimming pool and restaurant.

Before its closure, the club house which caters mainly for the British golfer ran full restaurant for traditional Sunday Lunch or fish and chips or the famous Gordon Ramsey Burger during the week.

I have been there all day today and I will be there again tomorrow advising Peter on the best way of getting the greens up to speed for re-opening.

The Ransomes 180 triple worked well and tomorrow I will trim the greens again. I have my work cut out, especially as we have three weeks of bookings here at the Pigeonnaire, the two websites to keep up to date, a swimming pool cover housing to finish for Mat and the extension to build before Christmas!

To cap it all Mat has Broken his knee (his definition). I think he means a ligament so he is out of action for 3 weeks.

We seem to be busier than we have been for years but enjoying every minute of it.

Tomorrow, I want to cut the greens again before popping off to have lunch with Roger and Judi Meadows at Le Mas  in St Marcory, near Monpazier the house we lived in when first moving to France.

I intend to run a regular feature on here and Landscape Juice about the tuning up of Les Mirandes and I hope, if you venture to France, near Bergerac, Castillones or Monflanquin and want to play golf, I have played my part in providing the right venue for your game.

Do you believe in coincidences?

I certainly do and this week it has re-inforced my view.

Donna has a little job updating a database for a UK company. Part of this entails calling people on the data base and trying to place them on contracts worldwide for oil companies.