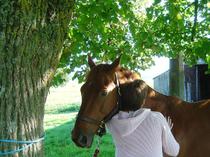 It has been a difficult week because I have had to tell a few porky pies! In fact I have to tell a lot of porky pies.

You see on the 27th October Donna will be 40 years young and as most people do, I wanted to mark it with something special.

(left: Donna and No Name meet for the very first time) 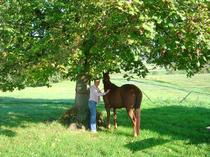 Four months ago I asked Helen where the girls go riding to look out for a horse for me as I was thinking of getting one for Donna's birthday.

Helen has a fairly high turnover of horses on trial with a view of buying and selling or finding for other people so we knew if Helen took one in then Donna would not necessarily be suspicious.

It is always difficult to talk to someone on the quiet without your spouse thinking something was up and this proved to be the case as I kept sneaking phone calls to ask what progress was being made and time was running short.

Then last weekend the breakthrough came when Helen told me she had the opportunity to take a 10 year old Anglo Arab on trial with a view to finding him a new home.

The owner, a 21 year old girl had become serious about her boyfriend and the horse was being neglected (not cruelly but not being ridden) so her Father decided that it was a waste and it needed to be found a home.

He is absolutely stunning. A handsome beast and with a lot of experience too.

Well, this is where I am afraid I had to invent a story to divert Donna's suspicions. I wanted it to be a serious surprise so I invented a story about doing a tandem free fall parachute jump at Bergerac airport but I sensed the tension all week and I wondered if I might have gone too far.

In the meantime I had agreed with Helen that we would take the horse on a trial and with her advice as she knows Donna's capabilities work out if the horse is suitable.

The plan was then to have Helen bring the horse this morning whilst we kept Donna occupied and let her tie it to the Lime tree by the house and hide in the barn and as we walked to the car to leave for Bergerac I would reveal the truth.

Helen in fact caught me by surprise as she was a touch early. Donna came out of the front door to hang the washing out and if she had wanted to go to the cave instead of the washing line she would have bumped into Helen. Luckily she went the right way but  knew I only had 2 minutes to get the horse tied to the tree before Donna came back.

Donna had been crabby to me as I think she felt there was something up and I also think she was very nervous about what I had planned and had even asked me if it could be postponed.

So I took her by the hand and led her round the corner saying I thought she was unhappy about her present. I then turned her to look her in the direction of the tree. The light was stunning, the tree and shade and this magnificent horse underneath and in a few seconds of stunned silence she burst into tears. I admit it brought a lump to my throat too.

Donna could not believe that he was for her and I think that until she had touched him that he was real.

Helen stayed in the barn for a few more minutes whilst Donna caressed and stroked the horse whilst blubbing in between her delight.

I think she will remember this for a long while.

We only havae a small problem. In all the excitement and rush, Helen forgot to ask his name so at the moment he is called 'No Name' until we find out.

We will also keep him at Helens for a few months until we can arrange things here.

It has been a difficult week because I have had to tell a few porky pies! In fact I have to tell a lot of porky pies.

You see on the 27th October Donna will be 40 years young and as most people do, I wanted to mark it with something special.

(left: Donna and No Name meet for the very first time)