Plans are now well advanced for the re-opening of Les Mirandes Golf Course near Bergerac.

After a strict regime of cutting & brushing the greens are now becoming finer. Beforehand, because of a long period without maintenance there was a huge danger of weed grass infestation causing the required Bents and Fescue grasses to be crowded out through over competition and light restrictions.

The target now is a systemic and persistent cutting of the greens to maintain this suppression of the broadleaved grasses whilst over seeding and top dressing the bring consistency to the surface levels overall.

On my shopping list is a SISIS Rotorake. I consider this an urgent acquisition and we are on the lookout for a second hand machine.

We already have a SISIS rotary spiker but in time my ambition is to purchase a Groundsman spiker which will give the flexibility of hollow tines, needle tines and larger solid tines to be used at the appropriate times during the season.

Some tough decisions have been made overall to the course layout and plan together with the course business plan so that we can work demographically and geographically to generate business.

I do not want to go into great detail about the history of the course but safe to say it has been an ambitious project with some fairly sexy long term goals. In the meantime some short term objectives have been overlooked and I hope I have been able to prioritise what we need tomorrow in terms of re-launching and maintaining the golfing traffic.

One area we have looked at is where the business is likely to be generated.

The course has previously been described as 'Executive' which as I have mentioned previously is a euphemism for 'short'.  Initially the word was used in its honest context but it was my view that used incorrectly and I feel safe to say has become a block to cash generative traffic in terms of local golfing public.

We are now steering towards promotion of terms and phrases that push its benefits for the holiday trade. Being shorter at little over 4,000 yards (for 18 holes) it is quite an advantage when you do not want to spend 4-5 hours walking around a golf course. The playing time is reduced to 2-3 hours which means you can safely play a round either in the morning leaving a full afternoon for something else or afternoon golf that allows the flexibility of having an evening free or a mornings sightseeing.

I have also looked at the implications of restricting children as the previous management have tried to do. Again I understood the logic but the targeted user would be thin on the ground in the Dordogne to restrict the course to 'executive' golfers. The thought of your business flying into Bergerac, having a meeting, playing a round of golf before dinner and flying out again is sexy but extremely difficult to achieve.

The axis for the future must now be a promotion of 'family fun'.

When you look demographically at the local potential in the region we can quickly identify that 10,000 ex pat inhabit a 100 km radius or so.

Not all are going to be interested in golf so I have taken a conservative view that only 5% are golfers and of that 5% half of them will have a venue already. So that leaves us with a target of an initial 250 golfers who we need to attract as regular visitors to Les Mirandes. Some of those that come, if they like what they see will join and others will be happy with the occasional game.

So, the holiday trade is essential here. By removing the exclusivity tag I feel we are potentially opening up from restricting 90% of our potential to attracting those 90% into the fold. 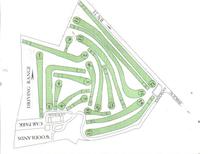 To achieve a club type atmosphere we now need to concentrate on the golf course strengths and reduce or eliminate the weaknesses. The previous management have shoe horned 18 holes into too small a space and I have looked closely at how the layout can be changed to make it exciting and progressive with good scope for expansion. To this end my proposal, whilst difficult to digest when you are the owner, is to reduce the course to 15 holes initially.

A number of other initiatives are bing discussed but it is early days for me and budgets are tight so we have to be realistic and implement these future changes as the new business model develops.

By doing this I believe as (tempory) Green Keeper/Manager, in time, I can present a course worthy of the discerning golfer but also being fair to the debutant as well.

The land adjacent to the course might be available in the future to expand into and maybe increase the length a little too. This is clearly for the future as needs are more than pressing now for a successful re-launch and get a flow through of revenue.

A new club house manager is due to arrive from the UK soon and we are aiming for a single weekend opening on the 14th and 15th October. The Owner, Peter Fuller who by all accounts is a very fine chef will lead the club house charm and greet the guests with Michael the new manager controlling the green fees and administration.

Me, I just have to make sure that the course is in a relatively good order for a fun day and hope all of the team can deliver the goods.

Its a major crossroads in Les Mirandes short life but one all of us is hoping will provide the impetus for longevity.

Plans are now well advanced for the re-opening of Les Mirandes Golf Course near Bergerac.

After a strict regime of cutting & brushing the greens are now becoming finer. Beforehand, because of a long period without maintenance there was a huge danger of weed grass infestation causing the required Bents and Fescue grasses to be crowded out through over competition and light restrictions.

The target now is a systemic and persistent cutting of the greens to maintain this suppression of the broadleaved grasses whilst over seeding and top dressing the bring consistency to the surface levels overall.