Please use the Google Calendar to look up availability. You can advance and retreat by using the direction arrows.

If you are unsure about availability then please do not hesitate to email us on perigordvacance@tiscali.fr 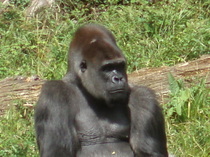 We have all taken the weekend off and I think it is the first time we have all been away from Jean Blanc at the same time for a break.

We have some good friends who we met back in 1997 while on holida in France. They have just bought a house in Charante and they invited us up for the weekend.

It was great fun, thanks to Martin and Angela's hospitality we were able to forget about the project and relax.

Driving up on the Friday was a bit tough because of heavy showers but the brilliant countryside was anough compensation to get us bye.

On the Saturday we all went to La Vallée de Singe - valley of Monkey's. 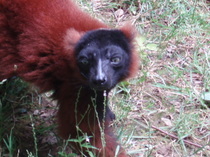 I was expecting to see lots of cages with saddened faces peering through the bars but was pleasantly surprised to find that all of the Monkey's were free to roam at will and even walking amongst us.

The more dangerous such as the Baboons, Gorilla's and Chimpanzees were all on cleverly constructed islands with pathways circling them for good vantage points.

If you are in the vicinity on your holiday's then this is well worth the visit in my opinion. 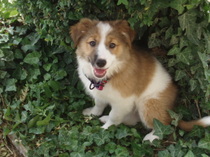 Say hello to our latest addition. Cookie is Fleur's new eleven week old puppy.
One of Fleur's friends a the riding school was looking for a home for the puppies and we went to see them Saturday morning.

There were only two left, both girls so we weakened at the knees and she came home with us.

Our neighbours gave us a kennel and we have put her in the barn. We do not intend to let her ram the house and definitely not be allowed in the Pigeonnaire. 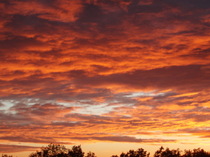 t has been very hot this week with temperatures of 28-32.
Today was broken cloud and quite close and the day ended with a spectacular thunderstorm this evening with hailstones the size of marbles.

Afterwards though the clouds eventually cleared and we were left with this stunning sunset.

The kids have been enjoying a swim at 6.45 am before school. The water temperature is about 23 degrees at the moment so really refreshing. 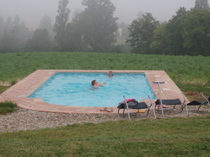 I promised a little update but I didn't deliver the goods so here it is.

I have got a real surge of energy and enthusiasm now that I am on to the finishing type of jobs.
The current one is jointing in the internal stone where we are not going to plaster over.

Do you remember that we sand blasted all the walls? Well this saved an awful lot of hard manual labour and cleaned the joints of all the poor dry lime or mud and made a nice deep cavity to accept the jointing mortar.
This jointing serves two purposes. One is cosmetic because quite simply it looks really good to have exposed or partially exposed stone and contrasting coloured joints to enhance the stone and also the jointing, once it has gone hard will secure the loose stones and make the whole structure secure. Jointing is surprisingly easy once you get the hang of the timing of the trowel stroke to apply the mortar.
It is also remarkably quick too and this I believe is why the enthusiasm has returned.

Last Sunday seemed like months from fruition and now I am 50% through the jointing I feel much closer to our goal.

If you are jointing (and I will do a how to video one day) then it is all about timing and mixture consistency.
Start by measuring out the sand and Renocal (lime) using a bucket. - your sand requirements will depend on what is traditionally used in your area -  We are mixing at 3:1 and:lime. By using a bucket as a gauge you will ensure that the colour will always be the same.

It had to come. I have published the first chapter to my yet uncompleted novel called Trugg's Garden

Because it is slightly on a gardening theme I have published it to Landscape Juice.

I have a little update coming tomorrow on the building and some other topical stuff but for now, I hope it is happy reading. 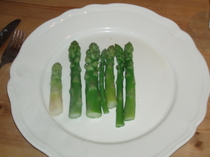 There are still not enough hours in the day to fill the vegetable patch with all the produce that we wished for this year. So far we have managed Onions (they are coming on a treat), Garlic Tomatoes and Potatoes.

So far the courgettes seedlings that set themselves have not come through so it looks like we will be without fresh courgette this year. 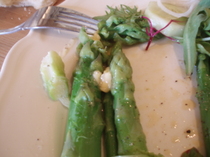 One thing that I have been looking forward to is the Asparagus. Until now we have not cut any spears so that the plants could become established.

Yesterday though I could not resist temptation any longer and cut seven spears. Rushed them straight to the kitchen, boiled them for three and a half minutes in a large pan with just a covering of water and a little salt.

I then took them straight from the pan to the plate (I didn't cool in cold water which is recommended by some. It is supposed to seal in the flavour).

I ate them with some smoked mackerel, a little salad and some crusty French bread. 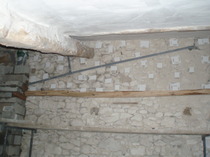 We all know that if ever you do toss something in the bin you will be sure to need it the next day.
I have kept all of the scraps of plasterboard from both the first phase last year and this recent work on the barn ceiling.

I have some pipework that comes into the barn from the bathroom of the main house which needed to be hidden. Not just for the look but also to minimise the noise.

The initial thought was to put up a softwood frame and then screw the plasterboard onto this but it meant an aweful lot of drilling into the solid stone which is never easy. The solution: Donna cut up about 180 scraps of plasterboard of between 100mm to 150mm square each.

I then randomly glued these to the uneven stone surface at intervals to use as fixing points. I needed to pack it out about 75-100mm so I glued three squares to each other using the lutece plaster.

You might think that this method is a bit iffy but I can assure you, after the plaster has gone off you need some fairly extreme force to prise it away from its fixing.

If you use this method, make sure that the plaster is a double cream  to clotted cream consistency. You will find that when 'buttered' onto the plasterboard you will experienced good adhesion and this will suck the board to the plaster using surface tension.

Stop, just for a minute and take it in. 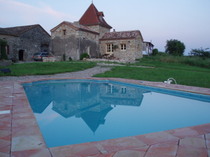 I have been sitting here for twenty minutes or so listening to the sunset.
The sunset and nothing is all there is to listen to here in the evenings.

No, that's not quite true. There is something, That something is nature.

Nature can be quite loud if it wants to be. The birds, the wind and the silence.

It is dusk and the weather has decided to take some valium and calm down.  It needs to calm down because its disruptive pattern has thrown a spanner in the works recently.

I hope that we can endure some tranquillity for a few days? If the valium wears off and atmospheric paranoia returns then the thunder and lightening might just vomit is presence back into our space.

Look into this photo of the stillness as it looks back into the Pigeonnaire.

What a fab evening. At least summer has arrived, all be it for a while.

When walls come tumbling down!

I really find that this whole project, whilst totally absorbing and interesting takes its toll mentally at times.
I have periods of 'burn out' where I need total rest from building and I need to do something different to re-charge a little bit so that I can re-focus.

I think the problem has stemmed from the change in the plan after Christmas that saw us tear down all the internal walls to re-build the proposed bedrooms as a large 'farmhouse' kitchen.

Don't get me wrong, the decision to go back to the original plan was the right one and it will enhance the property no end and give us greater bang for our buck in investment terms as well.

No, I think it is the rush of adrenalin that is needed when you work alone. Adrenalin helps to create which in turn oozes more adrenalin which leads to creativity. It is self feeding. Lose the adrenalin and you get mundane which might lead to the 'easy option'.

I built a pier out of blocks at the weekend to support a beam where I want to box in some ugly plastic pipes.
Henner's help me build it and because it is only 50cm square I was careful not to build it too high too fast.

The first lift went well and I successfully filled with concrete. The following day (last Sunday) I built the second lift of 1.5 metres but I made the mistake of infilling with concrete too soon.

Pop! out flew the blocks which had not had time to bond properly and I think I used too sloppy a mix and down it all came. Henner's and I despondently cleaned up the mess and stacked the concrete blocks up.
We had lunch and then in the afternoon re-built the pier.

Leaving it overnight. Donna and I started to fill the void again - plop!! it happened again!

Now, you would have thought, after 21 years landscaping that I should have known better? I am certain, if I had been responsible for the work on someone else's property, when time was money and reputation everything that I would not have made such a silly error and certainly not have done so twice.

I am convinced, and this goes back to the first paragraph or two that it is because the mind needs a rest from the building. It is causing a tunnelled approach which ultimately is not a good thing.

It does not help that the weather continues to throw bath loads of water down and because of the poor roof configuration I am getting water coming in on the new plasterwork.

We have spoken to the insurance company to see if we can make a claim.