Closing in on the doors and a night on the tiles

I had an email today asking why I had not managed an update since the 14th November. I promise that I haven't 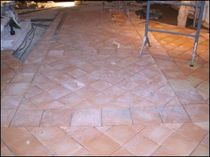 been sitting on my bum so here it is, just for Hillary.

I underestimated the time is would take to cut and lay the tiles in the barn and although I took all last week off to concentrate on it I didn't really get moving until Wednesday.

I think that the kitchen will have such character when it is finished. The tiles are clay with a hand finished egde which softens the look.

If the wind is in the right direction I should finish by the end of Sunday of maybe Monday afternoon.

The finest prune oven in France 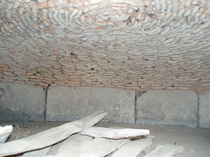 have something to show you that has really excited me (yes I know is is a sign of ageing and sadness). Donna and I have had a fabulous weekend in the company of Clive and Hillary who were our neighbours and very close friends in Oakhanger.

Clive, together with David and James, helped us move our worldly possessions over to Le Mas back in September 2004 (yes thats over three years now).

We spent some time showing them around and to finish off on the day before dropping them off at Bergerac airport for their flight back to Stanstead we went on a relaxing walk with the dogs before lunch.

I wont talk about Cookie chasing Mr Bertrands chickens although I am pleased to say she did not eat any.

We have started to lay the floor

Yes, today we laid the first of the floor tiles in the new kitchen. We had planned to start yesterday but after pulling through the four water pipes for the radiators I noticed that they needed to pas through the walls at the same junction as the electric conduits. 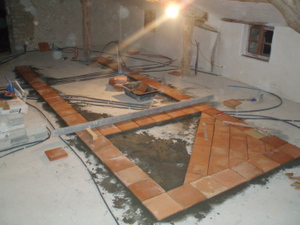 the water pipes. To complicate things the oil pip[e that feeds the boiler passes just below where I had to break the wall out so it was a little delicate. The stone was bigger than a football and it took two hours to drill around it to loosen the mud mortar.

After this I chased the tubes under the electric cables by cutting out a channel into the concrete. So today we were all systems go to start laying.

We have opted for a new terra cuit (terracotta) with a hand finished edge which softens the look.

Unfortunately, we could not find any second hand tiles which would have been our first choice. However, it still does not feel as though we have 'dumbed down' and they do look nice.

Marking out was fun because the room is not square so I have decided to make a focal point in the centre which is dead square and then work back to the walls. This is designed to attract the eye to the points which are easy to relate to the surroundings.

Continue reading "We have started to lay the floor" » 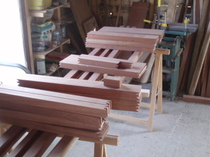 Evening everyone, I am so sorry not to have posted for ages. It is not that I am not interested in updating the blog but it is more a case of not knowing what to say.

We are in a bit of a vacuum really. I have done all that I can do in the barn but we await two important tasks, both by third parties, to be done before we can really run in for the final leg.

We have ordered some hand finished terracotta tiles for the floor. Three weeks have just passed (we were promised in two) so Donna has called today to be told that they will be delivered tomorrow (8th Nov).

The other is the preparation and creation of the triple panel French doors to fill the old bar entrance.