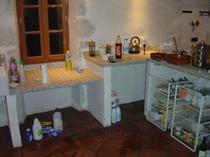 Under normal (with heavy emphasis on normal) circumstances, we should all be snug as bugs and moving onto other projects outside of the main house.

Trouble is, we do not seem to be normal and effectively built the house twice. Once in the original format but using plan 'C' and now in the new much more practical and comfortable format using plan 'A' (which we should have done originally)

Much has happened in the last three months and it is mainly because I have been trying to build content and accelerate my Landscape Juice site and the new Landscape Juice Network that I have kind of neglected updating this site. 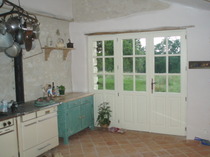 The new kitchen is now 99% finished. Donna's Dad has been here for ten days and has rubbed down, filled and painted the triple French doors and Fleur's bedroom window (the old 'snug' window).

I have made an oak shelf to put on a few ornaments and for the first time, we are able to go into the barn where all of our belongings are stored and start to retrieve some of the useful and decorative items that we have not seen for nearly four years.

The most emotional moment for Donna and I will come this week when Henry will go into his own bedroom for the first time since leaving England. Sure, he has had a space of his own for a brief period when we have rented but not had his own 'space' that he could personalise. Donna is completing the painting as I type and then the floor is going to get a polish and hopefully, this afternoon, we will assemble Henner's bed and get him set up.

I am pleased that we have had a chance to re do the old kitchen. At the time, everything was so rushed that I never felt as though I finished off properly. You know, plaster residues over wooden beams and probably the worst part was the lack of experience with the Lutece.

I am confident now that I can use the plaster at various stages of the mix from a runny'ish double cream to an advanced putty consistency so that large holes can be filled or voids shaped and sculptured to get the required profile.

What is more, using a simple paintbrush and copious amounts of fresh water, it is possible to work the material into spaces and finsih the surface to a fine detail that a humble finger will not allow (and without the lime burn too).

I do not know if you remember the old kitchen layout but it was a sort of open plan with the original simple steps up to the the bedroom and en suite. We have partitioned off the stairs to form a hallway and in doing so created Henry's bedroom.

All the tiles and work surfaces have been removed and the water and waste to the old kitchen sink boxed in just in case we wanted a show later on.

I have plastered all of the concrete block walls (I hate stud partitioning, especially in an old house) and I have plastered over any damage from removing the tiles and filling in the wood burner chimney outlet too. 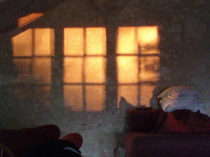 We have also taken the opportunity to add an oak support beam under the upstairs floor to stop the creaking.
The great thing about the beam is we already had it as part of the milking sheds and because it had been there years, it was dry and stable. I used the electric plant to straighten up the side that sits against the joists but left the tongue worn exposed sides as they were. Donna scrubbed it clean and we treated it with Xylophene to kill any worm.

I thought that I would show you this pictured from last week. With the triple door facing West we can benefit from having a cool room which is sheltered behind the main structure of the house but fantastic sunsets.

When the sun is at treetop height it floods into the room and we get this amazing warm glow on the end wall. Mind you, the kids complain that you cannot see the tele properly.

Under normal (with heavy emphasis on normal) circumstances, we should all be snug as bugs and moving onto other projects outside of the main house.

Trouble is, we do not seem to be normal and effectively built the house twice. Once in the original format but using plan 'C' and now in the new much more practical and comfortable format using plan 'A' (which we should have done originally)