Tracing the history of our French house 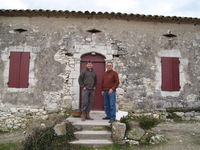 I will never forget the first time I saw Jean Blanc. The house was empty and all of the barns and outbuildings were used as agricultural storage and cows still occupied the yard and fields.

Mr Bertrand had told us that the house had not been lived in for about forty years and his father had purchased the farm including the land but they never used it as accommodation - It was much cheaper to re-register all of the property as agricultural.

I longed to understand the history of the place. I could not believe that it did not have a story to tell me yet for some reason, the walls looked the other way and stayed silent, determined not to give away any secrets. I knew they were telling a lie, I knew that the walls had witnessed many things but it seemed that history was destined to elude my enquiring mind - until last weekend that is.

I was busy in my workshop making stairs for the house (the last real 'big' job to do) when a silver Renault car pulled up outside the house.

'Bugger' I thought to myself. The afternoon was bright, clear and not too cold and the rest of the family had popped to Villeneuve to do the shopping which meant I could get on and do some much needed woodwork.

We get the odd car that pops up and when the driver realises that they had taken the wrong turn, they apologise and turn round.

I walked down and said bonjour to the gentleman who had exited the car. He said hello, turned to the house, and said to me 'I am Max Mallet and I was born in this house in 1943.'

I had suddenly become excited at being disturbed by my unannounced visitor and shook him by the hand.

A thousand questions entered my head and I felt that this was now the time to make some sense of why, what and where. Max told me that he lived with his parents and grand parents and a brother.

Max took it in turns (or at least this is how I interpreted what he said) sharing a bedroom with his grand parents and his brother shared with a bedroom in the small house (now the pigeonnaire) with his parents. They swapped over from time to time.

Max showed me where his mother and grand mother tended a vegetable plot (for those who have been here it is between the track and the swimming pool).

There is a also a small stone building on the edge of the woods which I speculated about - was it a tools shed, a shelter or even a well?.

Max tells me that it was in fact a shooting hide that his father and grandfather would shoot rabbits and hare from. They also shot small birds (a small finch) that were cooked on skewers with lardons to create a mini kebab.

He told me that they cultivated tobacco, wheat for bread and dried prunes in an oven which was in the corner of what is now our kitchen.

He also told me that we had a vineyard on the lower meadow of the farm (land I now believe belongs to our neighbour) which accounts for the large wine vats (cuvé) in the barn and the beer barrels in the Cavé.

Max says that they had little money but his life at Jean Blanc was happy and they were never short of food. They exchanged produce with other farmers. A boulangerie in Born took a third of their wheat in return for free daily bread for the year.

Max also said that when he returned from service in the French Marines (fourteen years in Africa - including Belize, Chad and Zaire) he returned and asked Mr Betrtrand's mother if he could buy back the farm.

Sadly fro Max she said no because of the value of the farm to her family but Max said to me 'my loss is your gain' and congratulated us on our achievements and said that he approved very much with our renovations and the additions to his former home. 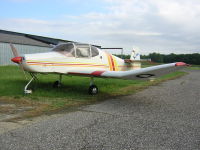 He also let me into a secret. Max built his own aeroplane and said that he had flown over the house and photographed it from the air.

I am hoping to stay in touch and visit Max and see his plane and find out some more. He says he has the written history of our house recorded on a CD but sadly no photographs.

One last thing - when I showed Max the new stairs I was making and the old stair/ladder we had inherited and used since we had been here, he told me that the stairs are the originals since his time there.

They had been used to access the loft space where they stored food and other essentials. I am loathed to throw them away.

Max is also a carpenter (and so too was his brother who had sadly died after Christmas 2008) and he complimented me on my humble achievements in the house.

Tracing the history of our French house

I will never forget the first time I saw Jean Blanc. The house was empty and all of the barns and outbuildings were used as agricultural storage and cows still occupied the yard and fields.

Mr Bertrand had told us that the house had not been lived in for about forty years and his father had purchased the farm including the land but they never used it as accommodation - It was much cheaper to re-register all of the property as agricultural.